Getting sick of my day by day recaps of the 2XU Ultimate Performance Training Camp? Too bad! Actually- this is the last recap, though I still have more coming that will be focused on areas we discussed such as sleep, alignment,  etc.  but Day 3 was our last official day as campers.

Like my last two days, I popped out of bed early so that I could get a coffee and walk along the Strand. Some of the other winners actually woke up early to run every single morning which I thought was pretty impressive. I would pass them as I strolled along with my espresso in hand enjoying the sunshine and the ocean view.

We started the day off back at the Yard to learn about Power.It was funny because Jeff offered $1,000 to the person who could give the history of the medicine ball slam and I took a shot in the dark and said the Romans used them “for…stuff.” And it turned out I was on the right track! They were invented in Persia but the Romans DID use them for training! I was so close! Ha ha!

We talked about plyometrics and Jeff said when it came to box jumps it’s not about the jump up onto the box, it’s about the landing. So he had us practices landing with proper form.

We then added medicine balls and would do med ball slams from the top of the box with the focus on the landing and maintaining proper form and alignment.

After our power session we headed to Good Stuff for lunch again and it was back to the yard for a quick session on foam rolling.

I don’t know about you guys, but I’ve been foam rolling incorrectly this whole time. We learned that rather than find a spot and grind on it repeatedly that it was better to find that spot and then move your body and use that motion to work out the tightness. It works like a charm and I had the BEST back stretch I’ve ever had.

We originally had training session on speed & agility scheduled but only had a half hour to do it. Jeff ran us through the basics of the 3-point position for a faster start and we got in a few quick sprint drills in the sand. Aidan, the owner of 2XU decided he wanted a race and was offering $60 to the winner. Jeff said he would award $20 to the male winner and $40 to the female. Guess who won for the females? 🙂

I was so happy to get that chance to showcase my speed to the group because for most of the camp I felt a little lame. Bonnie cranked out pull ups, Kat and Ziggy could lift like the boys, and here I was squatting with a 15 pound weight (because I was perfecting my form)! But needless to say, I did feel a little lame compared to these amazing other women. So to get a chance to show I have speed, to show I know what I’m doing when it comes to sprinting, kind of “proved” I belonged there.

When the race was over we headed off to Soho Yoga for a hot yoga session. Only a few of us had done hot yoga before and we were telling the rest how great it was and how much they would like it. Well- I didn’t like it one little bit. First off- they crammed us into the studio which I know is common in cities but I wasn’t used to it. Then the instructor began blasting her hard core rap music! I’m talking “Hey gangsta n***** I’m gonna shoot a f***a up!” rap. That was the music for the whole hour long session. Then, the instructor never demonstrated any of the poses she just told us to go into them and most of our group was completely confused having to look at the regulars to know what on earth they should be doing.  I didn’t like her mannerism, it was like a boot camp instructor more than yoga. And I do Bikram and I know it’s tougher and the instructors talk fast and try to get you to push yourselves, but they still do it in a calm tone. And to top it off, one of our group had to leave the room and when he came back that’s when she told us that you shouldn’t leave the room but lie on your mat instead. I have never had a hot yoga instructor NOT go through that before starting a session.

Overall, I walked out of there expecting to feel stretched out and relaxed and I walked out feeling annoyed and stressed. I won’t be trying the Fuse class every again!

From hot yoga, we went back to the park for a quick lecture on diet but it was difficult because it is such a personal thing. There is no right answer for everyone, diet is very specific to the person and their activity and training schedules.

After our lecture on diet Michael, Svein, Ashley, and I ran out to the beach to get in a quick ocean swim before dinner. When I saw how choppy the waters were I opted to just play swim rather than really swim.

For dinner we headed off to Pancho’s Mexican Restaurant in Manhattan Beach where I stuffed my face so full of chips and guac that I could barely eat my dinner! I also gave ordering advice to the international folks who don’t have experience with Mexican. Michael from Hong Kong and the Scandinavians all got my advice to go with an enchilada because really you can’t go wrong with those!

It was really sad to say good bye at this dinner. We all had become really close as a group and truly enjoyed hanging out with each other. A small cell phone photo shoot commenced.

I mentioned how close we all got which was evident in the morning when a bunch of us met up to hit up Paradise Bowls to try an Acai Bowl for the first time.

We also headed to the Yard once more to say bye to Troll and grab a Yard T-shirt. I’ll probably turn mine into a tank top and rock it all summer long! 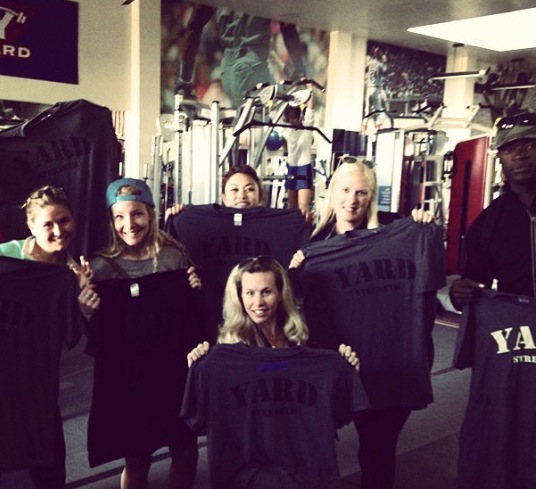 I was able to squeeze in a quick half hour roller blade along the Strand before some of my California relatives picked me up for lunch!

I am so grateful to have not only had this experience but to have met this awesome group of athletes. It felt so amazing to be part of a team again and I left feeling so pumped up and inspired by these dedicated athletes.

When we were parting ways we all hugged and someone mentioned how we needed a Facebook group so that everyone could stay in touch. I thought it was an awesome idea and we now have a Facebook Group that 15 of us are members of and we’ve exchanged pictures and plan to keep each other updated on training, fundraising, travelling, and just how we are.